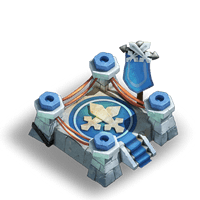 The Arena is a building earned after leveling up your Town Hall to level 3. It is used to participate in Hero battles against other players and rewards you with Honor Badges per hour, based on your ranking in the Arena. The basic settings of the Arena is a wide platform where your Hero Shrine is, and an enemy Shrine at the opposite side of the map. Connecting to two Shrines are three bridges built of stone and wood that splits into three, separate passages, then combines back into one bridge.

There are two "Modes" in the arena; setting up a Defense for incoming attacks, and attacking other players.

The Hero with the highest level in your defense will be displayed as an icon in the Arena match-up list for other players. 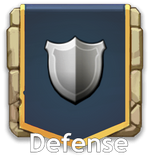 There are three hotspots where the player can place up to six Heroes. Heroes on the top hotspot will take the upper path, middle hotspot for the middle path, and lower hotspot for the lower path. Despite appearances, all three paths are of the same length, so three heroes with the same MOV SPD, placed on different paths, will all reach the enemy's base at the same time.

Losing a Defense results in a swap of the ranking with your opponent.

The player can store up to 5 Battle Chances

, while it takes 30 minutes to refill one Battle Chance. The player gets five choices of opponents, which are determined by the players arena rank and are sorted by ranking.

When the player challenges an opponent, the player is given 30 seconds to place up to six Heroes on the three Hero hotspots. The player will not see the Heroes' placement in the hotspot of the opponent until the battle starts.

The player cannot make any actions during the battle. If the player is going to fight the same opponent twice in a row, pay attention to his Heroes and Hero placements, because they will not change from battle to battle.

and does not change anyone's rank.

When you press the Arena, you will find 4 Icons. Those Icons are commonly showing before you enter the arena and Fight for your arena Rankings. Those Icons are Info, Defence, Enter, Expedition and Lost Battlefield. 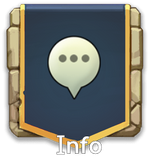 The three lanes have a length of 2800 units each. The following table displays the time needed to get to the enemy shrine for a certain movement speed, the formula to calculate this time is:

The layout of the arena when participating in battles appears to be a fudge cake. Also, the player cannot place two of the same because the second one will not appear in the list and therefore cannot be selected. But different ones with the same one can be selected. This also affects battles, but does not affect troops. 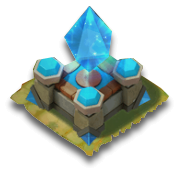 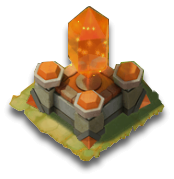 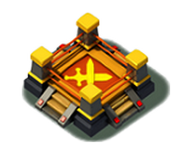