The Army Camp is classified as an attack building and is where you go to hire and train a variety of Troops. The number and type of troops available for hiring depends on troop development which occurs in the Training Center . You can recruit troops for Army Camps by purchasing them with Mana

Leveling up an Army Camp increases the camp's maximum number of spaces available for troop deployment and decreases those troops' hiring times. Hired troops will deploy automatically and defend your base when it is under attack.

When you click on an Army Camp to hire Troops you often see 3 Icons which commonly shown. These 3 Icons are Info, Level Up and Hire. Here are the details for the 3 icons:

There are another Icons which you will find once you Level Up your Army Camp. These are the Cancel Icon and the Finish Icon. The details for Cancel and Finish Icons are as follows. 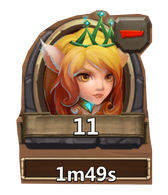 Retrieved from "https://castle-clash.fandom.com/wiki/Army_Camp?oldid=120337"
Community content is available under CC-BY-SA unless otherwise noted.