The Arrow Tower is an upgraded version of the Level 10 Watchtower and attacks single targets rapidly.

The Arrow Tower does the most damage to an enemy hero, has the highest attack speed, and has the most hit points of all towers.

Arrow Tower is a good choice in Here Be Monsters since it has high HP and can be used as a tank building. An Arrow Tower with a high-level garrison can assault enemy heroes allowing your troops to combat enemy troops.

Click the Arrow Tower and you will find 4 Icons.These Icons are Info, Level Up, Upgrade and Garrison.

Below are the following details of information regarding the Icons:

There are another Icons which you will find once you Level Up your Arrow Tower. These are the Cancel Icon and the Finish Icon. The details for Cancel and Finish Icons are as follows.

Upgrading Tower is an option where you can upgrade or switch to other special types of towers. Normally, when we upgrade a tower, we choose to level it up but somehow another option was to switch.

This upgrade page shows up when we press the upgrade button along with leveling up the tower a player chose, an option was either to switch from present tower to another optional special tower available provided that it should be paid with the amount the tower level has attained.

Blue garrison increases damage dealt. Damage dealt means the damage that already went through all kinds of reduction. For example:

If a level 3 Arrow Tower has level 5 blue garrison (450 damage and increase 10% damage dealt), it would deal 450 + 45 = 495 to the enemy with no damage reduction. By far in Castle Clash, damage dealt and normal damage are quite same as each other. For example:

But in case in the future Castle Clash release a new damage system which is Damage Blocked, damage dealt and normal damage will be much different. Imagine that there is a new talent "Block 450 damage when attacked".

Though it's less likely to happen, all the things above explain why damage increase from blue garrison isn't shown in the tower info like Cannon Tower and Magic Tower. 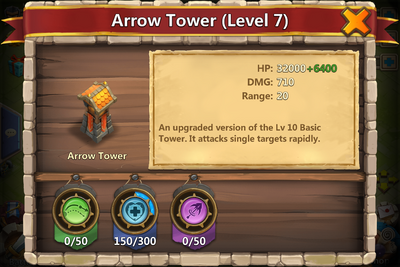 The Arrow Tower only has one tier, but changes looks after it reaches a certain level.