Here is the list of some base designs. Base designs are primarily built to beat HBM. There are too many variables that have an influence on which HBM wave you can beat, therefore are concepts sorted by Town Hall level. Though every single base design has its own flaw, we can still take advantages of what we can do with walls.

Bellow are the basics to making a base design

The rules of attacking troops and heroes are fairly simple. Choose the nearest target, travel until it is in range, attack until it is destroyed. For destructive troops, the nearest target is the nearest tower if there is one. Attackers targeting a regular building, not a tower, will pause to counter attack then return to the same building.

The first basic principle of base design is ensuring that "choose the nearest target" is not a hero. Surround heroes by other buildings that will be targeted. Choose buildings with high HP.  Towers are designed for this, and arrow towers have the highest HP.

The second basic principle of base design is using walls against ground attackers to make "travel until the target is in range" involve walking farther distances and through more damage. Flying units ignore walls and cannot be influenced. These bases all have openings in the walls, so the defender chooses where the attacker enters.  Imagine the barbican of a castle.  The castle wall has an opening, but the opening is heavily protected.

To prevent ranged attackers from shooting over walls, have at least 3 squares between the outer wall and any inner building. The inner squares will often have additional walls, flowers, or be empty. 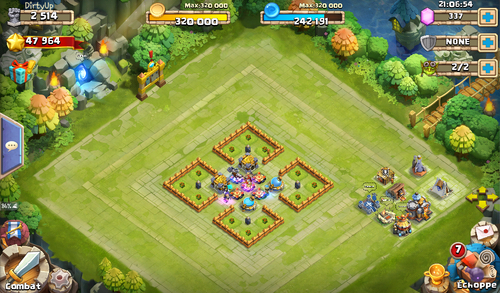 Description: It's a DeathClover modified base,where the vaults tank for you,and you have no towers due to the low might. It's very good if you want an account with very low might.

Description: Monsters walk around the walls allowing all heroes and towers to target them simultaneously. Provides some raid protection of vaults as well as being good for HBM.

HBM Wave: A-B (Depending on Heroes)

Description: Monsters split at Corners and this allows towers to take advantage and peg off a few heroes/troops. Heroes in the middle will move into the corners next to the entrance and this will draw the remaining heroes/troops to target the towers so that they tank while your heroes attack them without getting damaged. This base also allows for protection of a gold/mana vault during raids, I chose gold for obvious reasons. No troops are required for HBM, I only have them here for faster raiding.

Note: The walls near where you start HBM and where the quest board is, is not included in the base design, I have them there because I just levelled to TH Level 11 and haven't decided on a base design for level 11 yet, don't include them at TH Level 10, you will run out of walls if you try to. 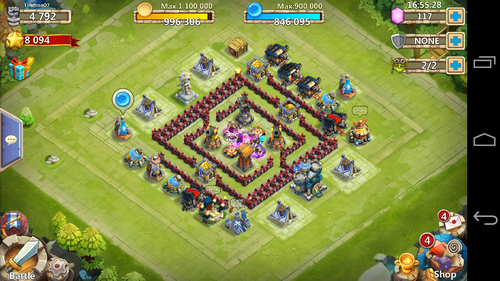 Description: Monsters walk around in the maze giving your heroes and towers enough time to take them out before they reach their your towers. 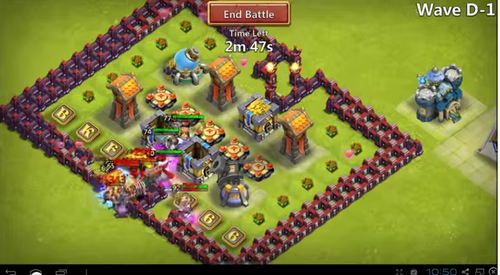 Description: Tower based design. Monsters target your towers while your heroes take them out.

Two ranged heroes required, preferrably Engineer and Druid at the edges closest to the towers

Note: Monsters break through the walls on the east and wide a lot. Not recommended.

Description: 4 entrances help spread monsters and reduces the number that can aggro on your heroes at a given time. Buildings outside the wall are arranged in such a way that the monsters cannot complete path around your walls. Monsters make an L shaped/ V shaped path from one entrance to the next.

Description: Mix between 2 entrance diamond and a Maze layout. 4 corner spawns will be re-directed to top openings, placed in a way where some of the group will begin the maze as the rest continue around the base being taken out by towers. Minimum requirements are 20x lvl 9 walls (inner maze walls) and the rest lvl 8. 3 lvl 4 arrow towers able to complete wave B, just re-arrange so highest lvl vault is in the gap where the bottom tower is. Lower part of the base should be 2-3 walls thick (2 if one layer is lvl 9) to avoid south spawns from just breaking through bottom of base. Reliably completes wave B 95% of the time. all lvl 9 walls and lvl 80 heroes should complete HBM-C. 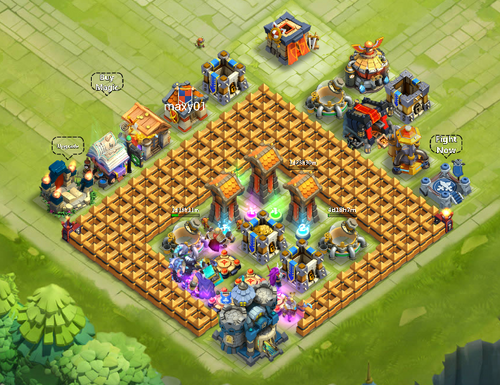 Garrisons: Not necessary but it is up to you.

This base will not work for H and and after. Good AoE heroes are Vlad, Santa, Immortep, Reaper and Dark Knight. Corner design makes the longest path to reach your base

Description:This set-up is tower based, your heroes must be capable of taking out all the enemies while they focus on the towers. Thunder god , Engineer and Atlanticore at 4/9 skill. Putting vaults or any other building inside your walls is counter-productive and will lead to failure. This is because enemies will target towers until they are destroyed but for other buildings your heroes can be targeted before the building is destroyed and the monsters will break through your wall to get to the buildings.. It is possible to beat  D using two cannon towers with this setup. This setup is vulnerable to raids. Placing two buildings or decorations at the tips can resolve this. For Here Be Monsters the buildings have to be removed. Decorations can stay.

Note: Putting a very low HP building at the tip can be a good strategy as it would be destroyed by wave 3 by Griffins. Its a risky strategy as non flying ranged heroes and troops( Serpent Queen and Centaurs) will try breaking through your walls. Its also risky if it lasts past wave 3 as it can be targeted by the Dino and destroyed instantly and your heroes will not survive. 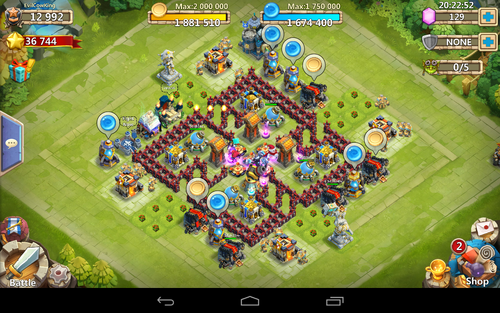 Heroes:  Description: Beginning with Wave D, your base will be swarmed by packs of Griffins. As they completely fly over walls, you will need to have a base design that immediately attracts their attention toward buildings, while your towers and heroes kill them off. If you have been using Cannon Towers, which are great for A through C, you will need to exchange them for Arrow Towers , as the former are completely useless against flying troops. It is recommended that you keep at least one Cannon Tower to deal with the large amount of ground troops that can overwhlem other towers..

This base design is highly effective in drawing troops into the base and having them circle around the paths towards their target building, while heroes and towers pick off the invaders. Out of 100+ completed HBM runs, there are only rare instances losing due to a time out. (This may happen in D, but far less often in E and F.) 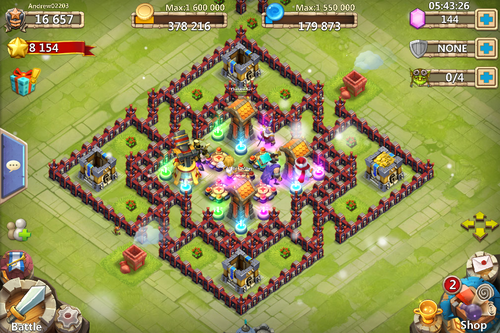 Description: Not sure if this has been done before but it's a simple modified clover that uses the zigzag to maximize damage and for your gold storages to tank while your heroes pick everything else off. The Arrow Towers can have optional garrisons for C and D but recommended for E. Cannon is to pick off large groups. 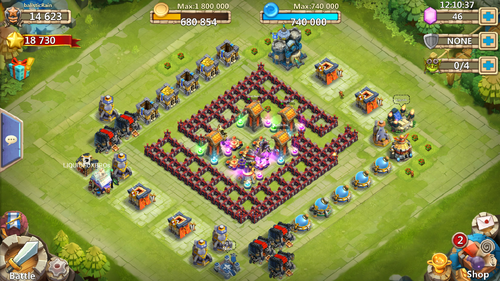 Description: Design focuses fire to single units to bring down enemies as quick as possible. Enemies run around the perimeter through wave E4 and reaches the center by E5 and die quickly afterwards. 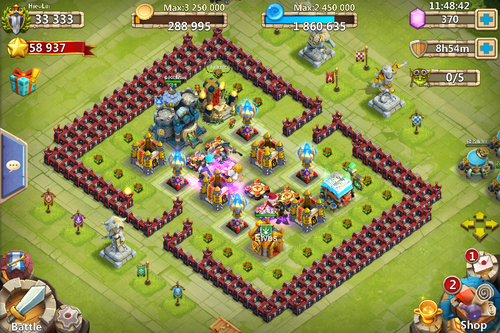 Heroes: 8 star, with skill lvl 5/9 or more. Thunder God, Immortep, Druid are essential for this build.

Placing hero is the key to win. Put ranged heroes with fast ATK SPD in those 3 hero bases close to town hall, so they can kill Ornithopters fast.

You need heroes who can slow MOV SPD like: Santa Boom, Ice Demon, Orksbane for boss.

Tower Levels: L10 Arrow Towers with garrisons of your choice depending on your needs.

Heroes: 140-160 depending on line-up.  Druid/TG/PD are mandatory and ranged/AOE with high hit points are recommended in addition to these.

Description: Base design focuses on control of enemy hero multi-targeting.  This includes SM and TG and is accomplished using the "4 corner" design and placing Guardian troops in all Barracks.  This increases the chance enemy heroes will not target your heroes dramatically.  As in wave H, you must protect your towers from the Ornithopters and increase their pathing time by placing them closer to the centre of your base.  Use your highest hit point buildings on the outside centre of your base.  Hero base levels should be 18 plus depending on your hero level.  If using TH 18 the zig-zag entry on each side of the death box is optional.  I recommend bomb placement around both entrances.

Note: This base has a weakness that the inside corner buildings are too far from Hero Bases. This results in SM attacking the corner buildings without anyone killing her, makes SM procs continuously until the whole base is destroyed.

Description: Fill up army camp with Guardians, for lvl with TG and SM, to prevent them procking into ur builidngs and Heroes.

Hero base levels should be 14+ depending on your hero level. 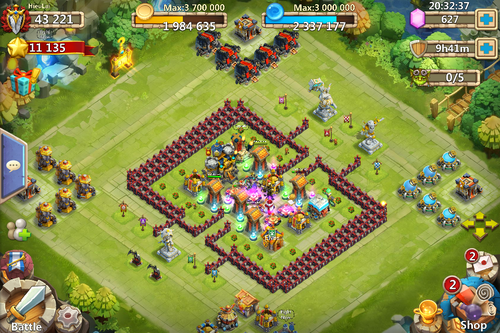 Tower: Level 8+, full garrison will be easier to farm both.

Heroes: Level 155+ (9 star is recommended). Ranger heroes must be placed at the corners.

Description: HBM I and J must have four corner Army Camps with 20-25 Guardians each. 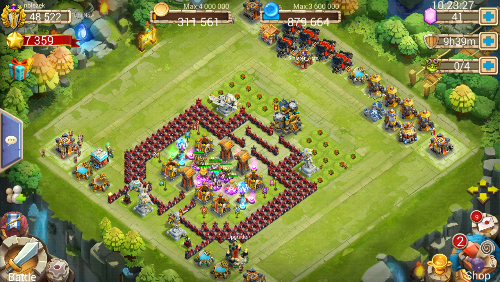 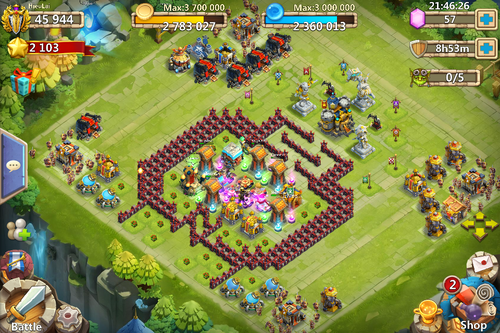 Description: Change the south entrance to be zig zag shape. Move the top buildings to be seperate and closer to the Town Hall. 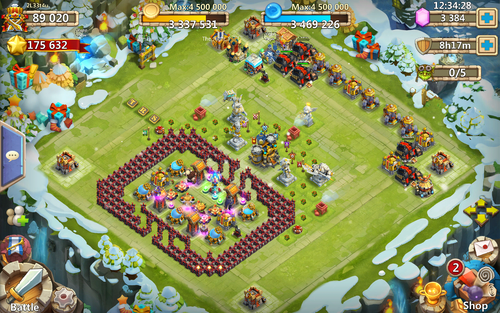 Heroes: Depending upon the wave but minimum levels 100-180 heroes.

To optimise this you should use the standard 2112 formation, and have Ranged Heroes or Mass Removal (Immortep) on the outside bases with PD and Close Range Heroes (Thundergod, Death Knight, Aries ect.(Or Cupid)) in the middle. Note: Heroes are just given sample.

Source: Cordi's HBM Base for other levels as provided on the same page for referrences.

Recommended Heroes For Free to Play

Here are the lists of possible Heroes which Free to Play players may use on Here Be Monsters.

Druid - His ability and strength is a mark-up choice in HBM. He acts as a one man army but very useful since he heals and attacks at the same time even and during the game play. Probably one of the best Hero to use in HBM. Druid should be placed at the center, and one ranged hero paired with a melee hero..

Immortep - One of the best hero you can come up with. His skills and added talents can clear up attacking troops from A-J depending upon his levels.

Thunder God - one of the best AoE and multiple target hero in HBM. He is one of the key player, the other one is Druid and Immortep. With his multiple Target attacks he can manage to wipe out troops on every waves.

Grizzly Reaper - one of the best AoE and multiple target hero in HBM. His atack speed is very fast. When he proc, he heal himself.

Siren - a multitarget Hero. Build in Slow down 5/5, helps with tought monsters and boss, she provides extra damge buff when she proc.

Paladin - Because of his high hitpoints that makes him second invincible blocker of the game. Able to hold attacking troops and monsters.

Pain-Da - His procs prove him almost same with Immortep giving an area of attack a best play in HBM.

Serpent Queen - Although her skill damage isn't very high, she can be very useful in the early hbm challenges, where tier1 or tier2 troops attack

Engineer - out from Ordinary Hero List He is one of the best Heroes proven useful in Raids and HBM. His capability upon HBM has been proven to be powerful in regards with multiple target attacks.

Marksman - is more useful than a level 80 Succubus in Here Be Monsters. She is one of the second Ordinary Hero that proven to be in par with Legendary.

The difference between almost completing and completing a Here Be Monsters letter could be the addition of a multiple target skill hero.