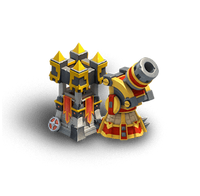 Defensive Buildings are buildings built to defend your base while you are offline as well as for the Here Be Monsters and Heroes Trial challenge. Your defensive buildings cannot guarantee your castle remains safe from player Raids. A Shield is the only item that can do that.

Towers are Buildings that attack enemy intruders. The Watchtower is the basic tower, which can be upgraded into Arrow Tower, Magic Tower or Cannon Tower when it reaches level 10. These upgraded towers also gain a new feature called Garrison.

A Hero Totem is a Building that attack enemy intruders. A Hero can be placed inside a totem and his skill is being triggered as soon as enemy Heroes get in Range

Traps can be placed on the ground and will explode after enemy ground units come in range. After exploding, you need to replace the traps with new ones except in Hero Expeditions. The Hero Trap attacks Heroes only and the Bomb Trap responds to troops only.

Walls are your first line of defense. Place them strategically to hinder the enemy's ground troops advance.

Retrieved from "https://castle-clash.fandom.com/wiki/Defensive_Buildings?oldid=119016"
Community content is available under CC-BY-SA unless otherwise noted.