You can’t move to an objective:

Each of your 3 teams operates independently.

Attacking: you have to defeat the guards defending the objective to capture it.

Defending: a defending player’s team stationed at an objective will join the battle after the guards.

Battle: members of the defending Guild can travel to the objective and participate in the battle.

Tap your Guild Hall, then tap “Event.” From the list of Guild events, tap “Fortress Feud."

Registration Day: The day before the event on the 3rd Saturday of every month. A countdown to registration is shown in "Events"under "Fotress Feud".

Event Day: The day after registration on the 3rd (or 4th) Sunday of every month (the Sunday of the 3rd Saturday / registration) Event Time Slots:

Tap “Form Team” to access the interface where you can edit your Hero Teams.

After you have formed your Hero teams, simply tap an objective and select a team number to send that team to that objective.

There are several different objectives on the map that grant different amounts of Capture Points and are connected by paths.

Tap “?” at the top left to read the Fortress Feud rules. 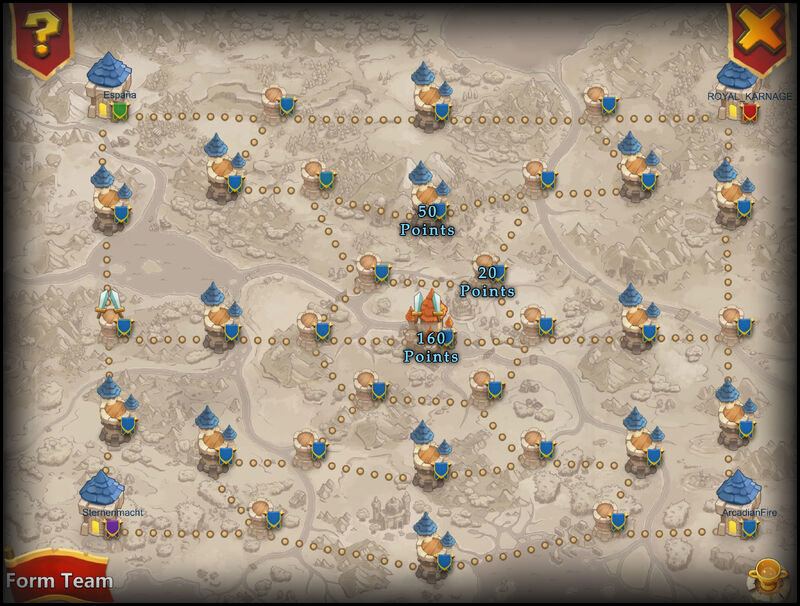 Starting points: The four corners of the map are the starting points for each guild. These can’t be captured by other guilds.

(Only Guild Leader or Vice-Leader) Tap an objective, then tap the Flag button to rally your guild members.

Fortress Feud lasts one hour and is divided into three rounds, each lasting 20 minutes.

After every round, Capture Points are updated and all dead Heroes will be revived.

After the event ends, rewards are awarded based on your guild’s point ranking within your division.

The number of Fortress Chests you’ll get depends on your guild’s division rank and your Might. (You can’t collect event rewards if you did not participate in the event.)

Retrieved from "https://castle-clash.fandom.com/wiki/Fortress_Feud?oldid=111711"
Community content is available under CC-BY-SA unless otherwise noted.