is acquired by clearing Dungeons , completing a challenge of Here Be Monsters, raiding other players, completing quests in Quest Board, collecting from your Gold Mines and/or by opening Gold Packs which can be obtained from Lost Realm, Warehouse, and by collecting Daily Rewards.

It is used to purchase and upgrade many types of buildings (such as the Town Hall, Mana Mills, and Walls). It is also required to research Spells, buy Traps and to upgrade Troops and Heroes .

A very small amount is consumed every time you initiate an attack against another player, whether you use the random attack button or pick someone in the leaderboard ranking. The same amount is used to switch between random players using the Next button.

Beginning from the 2014 Valentine’s Day Update, players can purchase decorative Statues with Gold

With the release of Quest Board, Gold 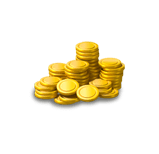 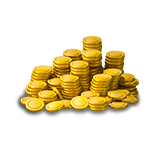 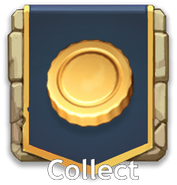 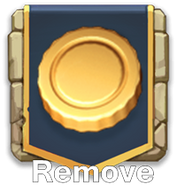 Gold pack I in warehouse

Gold version
Add a photo to this gallery
Retrieved from "https://castle-clash.fandom.com/wiki/Gold?oldid=107730"
Community content is available under CC-BY-SA unless otherwise noted.