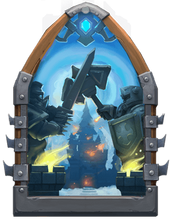 Guild Wars is a mode added for player involved with their guilds.

This allows the player to support their guild by fighting 4 different guilds in a time frame of 24 hours every Thursday and Sunday.

Requirements: the guild has to be in the top 4000 in might

to participate in guild wars.

Ranking is a set of 5 guilds. the total amount of each guild will set their rank From the best to the worse.

First ,10% of the guild points will be rewarded as guild credits

The second reward is Fame

from the guild points a player gathered for their guild. Bonus Honor Badges

will be rewarded for each player's rank in their guild.

The amount of Fame

rewarded is equal to the guild points a player earned multiplied by 0.3 and multiplied by the guild rank bonus shown in the table below. For example if you got 1200 points, and your guild got the 3rd place, you will be rewarded with 1200*0.3*1.2 = 432 Fame

The heroes defeated during a battle that was won can be revived normally , Exactly like if they would die in a Raid

or Here Be Monsters