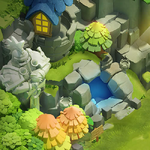 Tap on the cave in the top left corner of your map (displayed in the picture on the right side) to enter the Here Be Monsters challenge.

The goal of Here Be Monsters (a.k.a. HBM) is to defeat five increasingly difficult waves of attackers. You need to kill all the attackers. If an attacker gets stuck trying to destroy a wall or building out of reach of your attack, and fails to destroy the object (so the attacker never moves) and then the timer expires, you lose.

At the last wave of each Challenge, a boss hero that looks like a dinosaur

, Moltanica Boss, or Demon boss that joins the raid against you. Beware, the boss is much tougher than a hero of the same level. It has a ton of hit points, a fiercely strong melee attack, and an area of effect skill that hits all troops, heroes, buildings, and walls around it.

You get one chance every three hours to attempt Here Be Monsters, and you can store up to six chances ​

. You can increase your entries by one (but only up to six) by using Monster Pass

or add a chance when this symbol appears

where it automatically adds Monster Pass card when pressed.

Troops, bombs, heroes, and buildings do not regenerate between waves. And the hero revive talent only works just once for the entire level, not once per wave. So if your hero uses his or her revive talent in wave 1, it is no longer available for waves 2-5. If you overbuild your army camps, troops do rebuild while the level is running, but do not become available during the level, but only after it is over. Whatever troops you had when you started wave 1 will be all you have until all five waves are complete.

Each wave is rewarded by mana

. There is also a reward for winning the entire challenge (i.e. all five waves) in shards

Each checkpoint has 5 waves, detailed below. The hero and troop levels increase in each wave. Clearing all 5 waves will reward shards. Receiving the maximum XP is unlikely, but receiving about half the maximum XP is average.

The tables below shows the content of each wave, as well as the reward. The Boss column shows you the boss level. Beware, the boss at each level is much tougher than a hero of the same level. The Hero column shows the level of the heroes that attack the player. The Troops column shows the type of troops. Mana, Gold, and Exp you get for beating that wave is in the reward row.

For rewards for beating each wave, a player can get Mana, Gold or Experience, but the player only gets one of the three. They always get the shard

If the player gets an experience reward, it is split across to all heroes in the base, including garrisoned heroes and those that are blocked at a level cap. So, if the player has heroes waiting for upgrade (even in your towers), some XP will be wasted on them just like when a player raids or does a dungeon with capped heroes.