The Hero Expeditions are a feature added in the update to version 1.2.52. You can access it through the Arena .

Basically, Expeditions are like raiding without magic or troops; only heroes can take part. The big advantage is that you can use 15 heroes and even duplicates. However, you cannot use multiple heroes of the same type at the same time. For example, if you have 2 druids, you can only place the second one as soon as the first is dead.

There is a possibility to skip your opponent but you can only skip 5 times per day. As long as you don't lose your heroes you can continue playing.

There are 10 levels in Hero Expedition. At each level (R1 to R10) you are put against increasingly more difficult opponents with higher might. Your rewards are higher at higher levels. 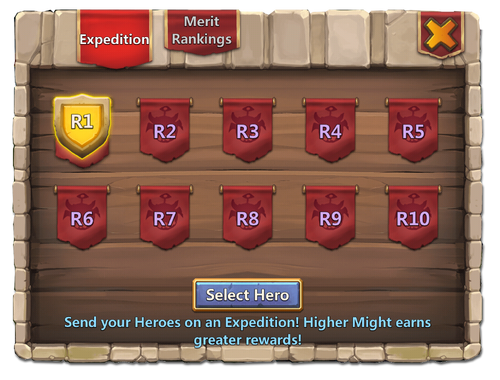 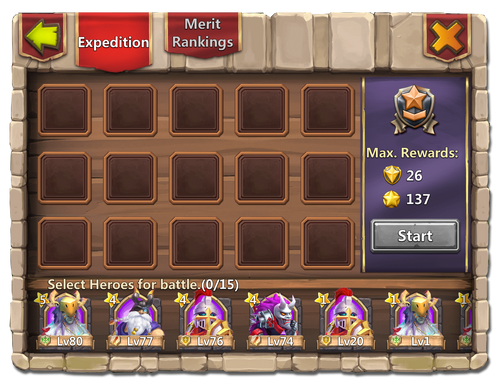 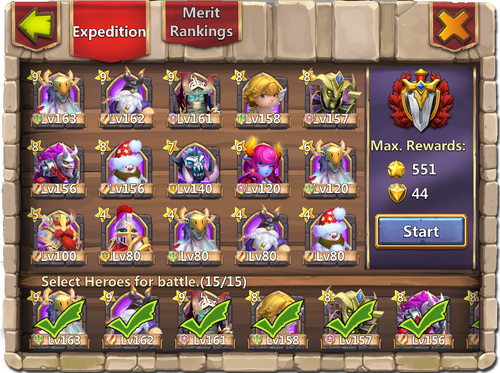 There is also a tab called "Merit Rankings". It ranks all players by Merits and Might (if having same amount of Merits). The Warehouse is a building for spending the Merits on various rewards. The Rankings refresh daily at 00:00 game server time. Merits displayed in Merit Rankings is the cumulative amount of Merits obtained in Hero Expeditions since the release of Merit system. 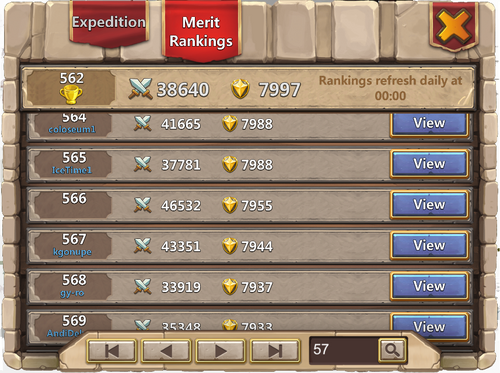 Below are the rules in each fight:

Might rank will determine the max heroes on battlefield and HP buff for the attack side.

1. The max number of heroes one can use in each battle is still 15, same as before.

2. Might rank will determine how many heroes that can be deployed at the same time, which is 6 - 10 depending on might rank, no duplicate heroes can be used simulatneously.

3. Heroes will receive HP buff in HE based on might.

All Credit for this information goes to guoyuus on the IGG Forums (http://us.forum.igg.com/forum.php?mod=viewthread&tid=161002).

Hero Expedition gives rewards as you complete the expedition. Part of this you get Merits

. There are no statistics yet on the amount of Merits and Honor Badges you get at which Might but it will depend on the player's might.

For more information on the resource Merit and the building Warehouse go to the associated wikia-pages.

Heroes Expedition is a great option to get merits

but also a bit difficult one to deal with especially when you are dealing on a level where your might are steady as the enemy's. Merits are useful especially in purchasing items on the Warehouse. Here are some tips a player may get to win merits.

Retrieved from "https://castle-clash.fandom.com/wiki/Hero_Expeditions?oldid=118333"
Community content is available under CC-BY-SA unless otherwise noted.