Heroes are the main attacking units and a crucial part of success in the game of Castle Clash. Heroes will need to be placed on a Hero Base in order to use them in some game modes. Each hero has their own unique skill which can be increased to be more effective, and a random talent that can be changed or leveled up based on the player's choices. 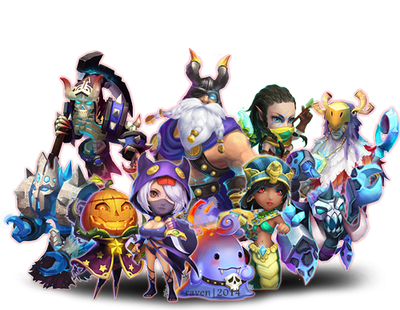 Heroes have a star level, which is based on the level of the hero. To increase their level, heroes will need to be used in one of the following:

Heroes can also increase their level by consuming Tomes. Heroes can earn EXP until the star level's highest level has been reached, which is up to the next 20th level (1-star has a maximum level of 20, and 5 stars have a maximum level of 100). In order to earn EXP again, the hero must be upgraded, which requires a certain amount of Gold and Honor Badges to be used, while also requiring a certain amount of Flames to be earned in order to upgrade the hero. As a maximum-star-level hero cannot earn any more EXP until they are upgraded, it is advised not to use them in EXP earning modes if you don't want to waste EXP.

Heroes can be inscribed to boost their attack, health and might. Only 4-Star heroes and above can be inscribed. Each star level has an Inscription cap. At every Star beyond the 4th, you gain 20 inscription levels, with the max level is 100 after reaching 8-Stars. After level 21, you can use Crests as a second Talent.

Sacrifices are not heroes you use for Garrisons or a type of battle, but rather, are consumed by other heroes to increase their Skill XP and Skill Level.

Ordinary Heroes are the easiest heroes to obtain, but are mostly useless compared to other heroes. However, they have their own extra stats for Tower Garrisons and some can be useful for tactical situations.

Elite Heroes have better stats than Ordinary ones, but still mostly pale in comparison to Legendary ones. Like Ordinary Heroes, they can be used for a different extra stat in Garrisons, and can be used in tactical situations.

Legendary Heroes are the strongest heroes in the game. Your power in the game single-handedly depends on what Legendary heroes you have and how strong they are (Skill level, hero level, etc.). Some can only be obtained through certain methods..

Bosses can not be used by players, but are considered as heroes and are used in certain features of the game, including Here Be Monsters, Team Dungeons, Wretched Gorge, Here Be Demon and Challenge A Boss.

In order to hire more heroes, you will need to go to the Heroes Altar. There are several ways to hire heroes, which includes:

Hiring heroes with gems can be for free once every 24 hours.

You cannot have more than one of the same Hero fighting or defending in any game mode, but you can have duplicate heroes occupying Tower Garrisons.

Hero Expeditions allows you to select duplicate heroes for raiding, but will not allow more than one of the same Hero to be placed until the first has been killed. (Example: Two Thunder God may be selected, but only one Thunder God can be placed when raiding the enemy base given to you.)

Extra Heroes In The Chinese Version

The heroes shown below are used for the Tencent Games version of Castle Clash: