(HB) are one of the most important resources. They can be used to hire Heroes and to increase their Star level.

HB  is awarded hourly, depending on the Arena rank and can be earned in the Arena, Raids, Dungeons, fighting against the Boss or be bought at the Shop (1,000 HB

HB can be lost by failing Raids against other players.

for the initial roll and a cumulative addition of 100 additional Hero Badges per roll for the first 10 rolls, 500 per roll for the next 9 rolls, and 1000 per roll as far as anyone has seen after that. Recruitment cost will reset back to 500 HB when the server time refreshes.

You can roll Legendary Heroes with Honor Badges

but the chance is nearly zero. According to this thread --> Rolling Hero with HB, it is unlikely that you will receive Legendary Heroes using Honor Badges; meaning, at high levels of play, Honor badges are best used to level up your Heroes (by giving them more stars) or by boosting their abilities (by recruiting random Heroes and sacrificing them) rather than trying to add heroes to your roster through rolling.

Honor Badges are also used to increase the Star level of a hero, which raises it's maximum level capacity: 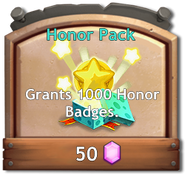 honor badge pack I in warehouse

HB Old version
Add a photo to this gallery

Retrieved from "https://castle-clash.fandom.com/wiki/Honor_Badges?oldid=121806"
Community content is available under CC-BY-SA unless otherwise noted.