Lost Battlefield is an additional game feature under the Arena icon. It is a feature where Players battle among others and earn Fame as a reward. Each player is given 5 chances per day. Each "Season" runs from Monday to Sunday. Your 5 chances will re-fill when the game server time reaches midnight. After each Season you are rewarded with Gems according to your rank.

You can enter the Lost Battlefield once you reach 10,000 Might. 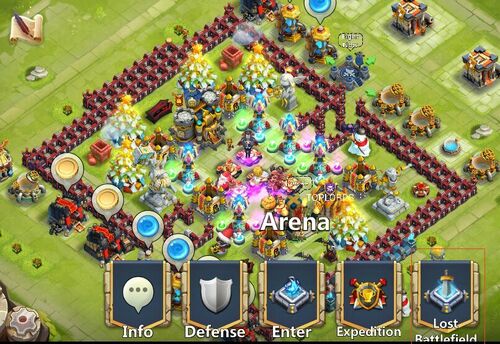 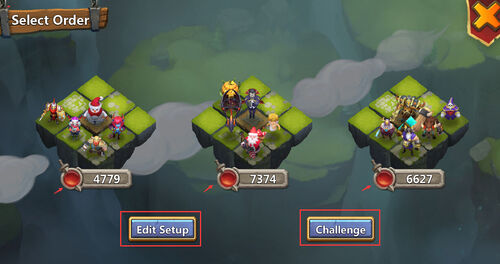 Once you’ve formed your teams, you’ll be brought to the Lost Battlefield main interface. There are five main buttons here, as shown in the image below. 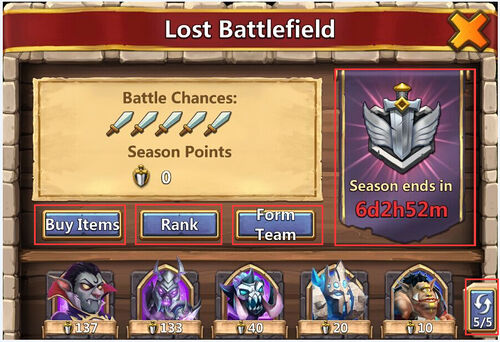 Tap the large emblem icon to see how many Season Points you need, the bonus Fame you can earn per battle, and the amount of Gems you can win at the end of the Season based on your rank.

. Fame can be earned by fighting in the Lost Battlefield.

This is a ranking of Season Points earned in the Lost Battlefield. The first row displays your rank, Season Points, and the amount of Gems you’ll earn after the Season ends. The rankings update daily at 00:00 EST (GMT -5).

As introduced earlier, tap this to edit the setup of your 3 teams.

Tap the 2 swirling arrows to change the list of five opponents to fight. The list can be changed up to five times a day. Chances will be replenished daily at 00:00.

You can challenge other players by selecting their Hero portraits in the main interface of the Lost Battlefield. You can then decide the order to deploy your teams.

These are the points earned in battle. They reset after every season. The more Season Points you have, the more Gems you’ll earn at the end of the season.

There are five different ranks based on the amount of Season Points earned. They each provide a different bonus to the Fame earned from battles.

Note: If two players have the same amount of Season Points, the first to win the amount will be ranked higher.

The amount of Gems

awarded based on rank and position is as follows:

Each Season lasts for a week. A new Season begins every Monday at 00:00 (Sever Time). After each Season, tap the “Rank” button to see the Rankings and collect your Season Rewards. Season Rewards will be replaced by new rewards when the next Season is over. Collect your rewards before they’re gone!

Retrieved from "https://castle-clash.fandom.com/wiki/Lost_Battlefield?oldid=115260"
Community content is available under CC-BY-SA unless otherwise noted.