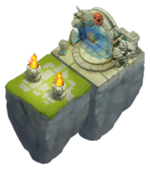 The Lost Realm (LR) is located at the north-east side of the screen where the bridge is together with the portal. Lost Realm's Portal can be found placed on a two blocks of land which serves as the entrance. Lost Realm offers different challenges and rewards.

Here are some important details upon entering the Lost Realm.

Level and Experience - As the player gains more battle exp and levels up in the Lost Realm, new map area will be revealed. One can get more exp from moving and fighting. increase your level to unlock more area of exploration. Explore and defeat monsters to increase your level.

Stamina (Moving Energy) : Energy is needed to move around on the map. Energy will recharge at 1 point / 10 min. One can also buy energy by clicking the

Blue Crystal - This resource is used to inscribe your heroes to raise the inscription level and also to forge two same-level crests into a random one of the same level, and also. Once level 21 is reached you can equip heroes with crests which further boost your hero. Blue Crystal may be obtained from the crystal mines and Battle Altars. Player may collect up to a maximum of 50,000,000 blue crystals at a time.

Red Crystal - This resource may be obtained by defeating monsters. It is used to upgrade the production of blue crystal mines and are required to combine identical crests from the same type into a higher level crest. It is also used to Evolve legendary heroes. Player may collect up to a maximum of 50,000,000 red crystals at a time.

Treasure Chest - There are 3 types of treasure chests: bronze, silver, and gold. The corresponding type of key is needed to open the chest. The treasure chest contain rewards such as blue crystal bags, crest bags, crest boxes, gold packs and mana packs. Rewards have varying levels of quality as well, with silver and gold treasure boxes sometimes providing rare versions of the rewards.

Exit World - press this icon and you will be redirected back to the main game. 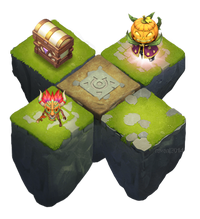 The Lost Realm map starts out as a 5 land tile map in a cross. Every level you gain will add 2 land tiles to the map until you reach level 17. After level 17, the Lost Realm map will no longer expand but monster levels get higher and blue crystal mines can be upgraded.

Stamina - You have a maximum of 80 energy. 1 energy is replenished every 10 minutes. Every move on the map takes 1 energy.

Here are the Crest Bags and Crest Box.

Treasure Chests give different types of rewards based on their type: bronze, silver, and gold.

Gold chests are more rare than bronze and silver. If not used they may change to another type on exit from the realm and with the passage of some time.

If you touch a chest and have the right key it will open and show a  question mark. You have to walk to it to get the reward.

If you touch a chest and do not have the right key, the chest will be changed to a chest with a big chain around it. You cannot open it until you have a key. It is not worth walking to it.

Keys to open the Chests

Produces large amounts of Blue Crystals for the one occupying it. Will be under protection for 4 hours after it is successfully occupied. Fights are located at the same map as Torch battles

Each victory in War Altar may help it upgrade. The table below shows the upgrade data for Battle Altar.

On every game mode, we see different icons. Lost Realm also has different Icons which we normally see everytime we enter the world. Here are the following Icons:

Info Icon = this icon shows the details of the tile, preferably the war altar tile or the crystal tile information which regards to details or number of production.

Move Icon = this icon is for the movement or stamina. It indicates whether to move or use certain amount of movement from tile to tile.

Collect Icon = this icon shows when you tap the war altar and the Blue Crystal tile. It indicates collection of certain amount of blue crystals from 2 sources mentioned.

Level Up Icon = this icon shows only on Blue Crystal tiles/mines. It indicates to level up the mines for a certain amount of red crystals.

Battle Icon = this icon shows everytime the player encounter monster tile or by heading to the war altar if someone has already occupied the said altar. Battle indicates that player can fight for different monsters with different numbers of enemy.

One of three random events can occur at any time on completion of an action in Lost Realm: Merchant, Here Be Demon, and Treasure Trove. An action may be a battle against monsters, the opening of a chest, etc. A random event can also be found with a "?" icon on a tile. No statistics are available at this time about how often these events are offered or the probability of getting a specific event.

The Merchant event provides an opportunity to purchase items with gold or gems. The screen will show a Notice: Merchant. If not clicked within a period of time, the notice will auto-close and the opportunity will be lost.

On opening, six items are offered. The price is consistent for any given item. For example, a gold key always costs 1 million gold. Your total gold, mana, and gems are displayed at the bottom of the screen so you know how much you have to spend.

Tap an item to get Item Info and a confirmation to spend the purchase price. This confirmation also shows how many items of that type that you already have.

When done with purchases, click the X to exit.

The Merchant option remains available for 4 total minutes in an icon at the right of the Lost Realm map. During this time, if required, you can leave the realm, do a quick battle, or to sell or use items from the Market to get the resources required to make a purchase. The icon disappears after this total 4 minute period and the Merchant event is over.

On accepting the Challenge you have an option to Invite a single Friend to battle with you. Check the friend and click Challenge to start the battle. Select the friend with the highest Might to give you the best chance to collaborate and defeat the demon. If you click Challenge without selecting a friend you will get the option to continue anyway and challenge the demon on your own ... this is not recommended.

On Victory, click Exit. Your reward is displayed. The "Demon Loot" consists of two items, often a Mythic Crest Bag and some number of Red Crystals.

If you do not win the challenge, you are returned to the main Lost Realm map. An icon displays to the right to allow you to get back into the HBD challenge, to select another friend, and to try again.

While you can have many friends, a single friend can only be used once every 20 minutes for a HBD challenge. In other words, select a friend and do a challenge. You must select another friend of a different might to do another challenge - you can't continue to use the same high-might friend in all battles. After 20 minutes friends are again available for a new challenge.

Some demons have two companion/escorts. These are refreshed on each challenge even if they are defeated.

The Treasure Trove event provides an opportunity to purchase three unknown items, each time spending more blue crystals in the hope of getting something better.

Three chests are displayed. The cost for opening any one chest is 8900 blue crystals. The reward from any one chest is random and fairly low-level, like a Crest Bag. On opening one chest, the cost to open one of the other two chests increases to 17800 blue crystals. The reward from this may be better than the first, like a Mythic Crest Box. The cost to open the final chest is increased to 26700. The reward for this final and much more expensive purchase may or may not be better than the others.

The cost/reward in this event is a total gamble. There is no guarantee that giving more crystals provides a better chance of getting a better reward. Also the rewards seem to be limited to crest bags and boxes that do not include crests higher than level 2. For this reason it's generally agreed that this event is a waste of resources which could be better used for inscription.

Stamina The goal is to be as efficient with your stamina as possible, since stamina is a very limited and valuable resource. Here are some tips.

Retrieved from "https://castle-clash.fandom.com/wiki/Lost_Realm?oldid=121320"
Community content is available under CC-BY-SA unless otherwise noted.