Raids are the bread and butter of Castle Clash, and are one of the main focuses of the game. Player's bases will be put to the test against another player's units as they try to either destroy their base or steal their resources.

Raiding is an essential part of the game. Either winning or losing a Raid, it can help players completing their Daily Quests, Quest Board, Achievements as well as getting enough resources for building/upgrading their base and give a minor amount Experience to Heroes.

difference between the raider and the enemy is up to about 5%. When you reach about 23,000 might, it will widen the Might range, and you can find a top might player or a nearly 20,000 might player.

To make a Raid, tap on the "Battle" icon at the bottom left corner, then choose the Raid icon

, it will cost a few Gold

to start. Each raid costs 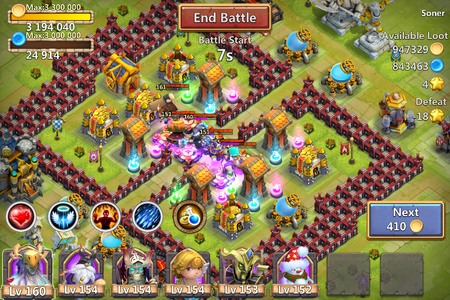 a player will pay if loses the raid.

At the lower part of the screen shows a "Next Button".

The button's purpose is to skip the current base that a player chooses to raid and find another one. It costs the same amount of Gold

to start a raid. This button will disappear when you drop any units to the battlefield or when the 30 seconds waiting timer runs up.

Below, you will find the lists of Heroes and Troops available to join the battle. It is commonly found at the lower part left of the screen. It is not allowed to raid if u dont have available troops and heroes which is currently dead during the other battles. The game will notify the player with a notification informing that there were no troops available to battle. If a Hero deployed on the raids were dropped in the battle field, it will show a faded black and white color given that it was on the field for raiding. If the hero deployed dies in the battle, an X mark

will be shown on the image of the hero showing that it is already dead.

At the top of the Heroes listed to be available to raid, you will find lists of Spells and Flags available to use. They must be purchased in Relic Hall and Guild Hall manually and will disappear upon used.

If the Player wishes to immediately end the battle, an End Battle button is shown in the middle of the screen.

. End Battle button helps the player to stop the raid in the middle of the battle or during the percentage rate of the raid. If the battle has started, player will win or lose the raid. Otherwise, within the 30 seconds waiting timer, Player will return to their respective base and lose nothing except the Gold

cost for making the raid when End Battle button was pressed.

Each Raid are given 3 mins time. If the timer

starts after the given 30 secs of starting time, the player has option to continue the fight or end it by pressing the end battle button. The winner will be determined depending on the percentage of damages given by the raider to the base being raided. If the player was not able to complete at least 50% of the damage on the raided base, the defended base win.

To steal a player's resources, you have to attack the other player's Mana Vaults, Gold Vaults, Mana Mills and Gold Mines. You do not have to destroy these buildings in order to get resources, even only damaging them for example with a Spells will rewards you with a percentage of the resources based on the damage done. In order words, you don't have to win a raid to get resources. 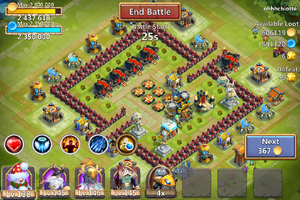 You can steal up to 25% of an enemy's resources if you use the Raid feature in the Battle menu. If you attack a player directly by searching for them on the Ranking Lists or through Battle Reports, you can steal up to only 5% of their resources, but will not able to gain any Experience.

If you can not destroy at least 50% of the enemy base, you will lose the battle and lose an amount of Honor Badges

level and if you destroy more than 50%, you will earn an amount of Honor Badges

level. Although, even if you lose a raid, you will get the resources you have stolen. 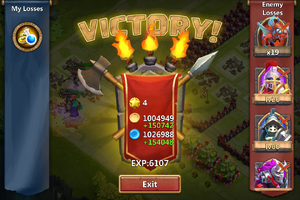 Using Flags in a raid will give you extra resources based on the level of Flags. No matter when you put the Flag in the match, which can be right at the start or right at the end of the battle, you receive the same amount of extra resources. Extra resources will not count directly but be displayed below the number of the resources you raid as "+ xxxxx".

Note: No experience is gained if no heroes are used in the raid. 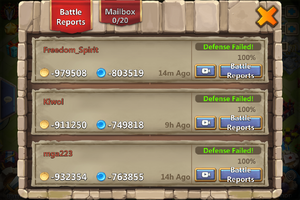 After every raid, the raided player receives a battle report. The battle report can be accessed by tapping on the mail icon. In the Battle Reports window are all enemy raids listed. You can see the enemy's name, the stolen Gold and Mana, the time of the attack, the percentage of destroyed buildings and if the defense was successful or not. 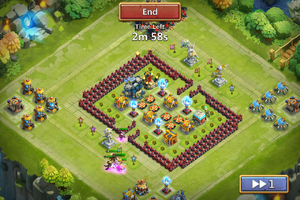 You can also watch the whole raid, if you tap on the Replay (

) button. This only works if you and the person who raided you have the same game version. In the Replay, you can play it fast forward by 1x, 2x or 4x speed by tapping on the icon in the bottom right corner. 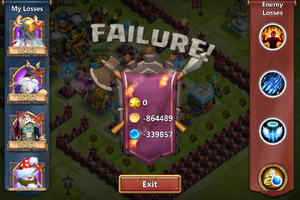 If you want detailed information on the Heroes, Troops and Spells used by the enemy, you can tap on the Battle Reports Button or watch the Replay until it ends.

By tapping on the players name, you can also view his base and attack him. If you choose to attack him, you can only get 5% of his resources and will earn neither Experience nor Honor Badges