Talents are passive abilities for Heroes. The higher the level of a Talent is, the stronger the effect. The level of a Talent can't be increased unless it is 5/8, 6/8, or 7/8, instead the player is given the possibility to roll for a new Talent with gems, talent refresh cards, or level 5 talent chests.

A Cupid, Pumpkin Duke and Druid with 4/10 skill each will increase attack of all heroes by 95% when working together and by 153% when they all have 7/10 skill.

A level 6 Hero Trial wave of 18 Cupids, assuming they all have 7/10 skill at level 130, will increase each other's attack by a total of 42588% if they all use Cupid's Arrow together. And they have nothing on Pumpkin Duke.

The number listed by the swinging sword in the Hero Altar is the time it takes to make an attack, in milliseconds (ms). For most heroes, the attack time is 1000 ms. Slow attackers, like Paladin, have a higher number. Fast attackers, like Ninja, have a lower number. When attack speed is increased, the attack rate is divided by the increase amount.

Complicating matters is that the game function is 200 ms increments. This means, both Grizzly Reaper with 750 and Ninja with 800 effectively both attack with a 800 ms delay if not otherwise buffed for speed. Thus, some levels of speed buff have no effect on the hero's actual speed.

The following table shows the computed attack delay with berserk for each hero's base delay currently in the game. Bold entries signify an effective increase over previous entries or the base.

It should be noted that Pumpkin Duke's speed buff does stack so even a berserk level below the point of reaching the next 200 ms interval may, with Celebrate, reach a 200 ms interval that the hero normally could not reach with just the Celebrate buff. However, in general, it is best to avoid berserk talent levels that do not directly benefit the hero.

Damage deflection reduces the damage taken by the defender and inflicts that damage on the attacker. Does not inflict damage on buildings. Affects damage but not other effects of skills and talents such as coma.

Flame Guard is (not proven to be) better than Blade Shell on average.

In terms of damage reduction, Stone Skin is better than Tenacity at level 5 and equal at level 4. Druid or Angel healing benefits Stone Skin more, while Restoration healing is equally effective for either. Stone Skin may hinder the Grizzly Reaper and Succubus skills as well as reduce the amount of damage that Michael can reflect.

Stone Skin is better than Scorch on average, especially at higher levels, but Scorch may occasionally stop a death blow. Stone Skin may be better than Flame Guard above level 3, but Flame Guard deflects more damage at lower levels than Stone Skin reduces.

Revive is the most useful form of damage reduction even though it only works once per battle. In most situations it forces attackers to choose a new target. If the hero does not die a second time there is no need for revival after the battle. It is still as effective as Tenacity against armies.

Here you can find talent suggestions for arena, raids, dungeons, and boss battle. 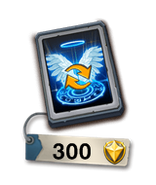 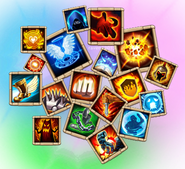 Talents Created by Knightraven
Add a photo to this gallery