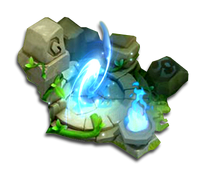 Team Dungeons aim players (up to 4) to work as a team fighting the Storm Mesa or Lava Isle. Each Storm Mesa Room corresponds to different powerful Centaur Boss(es) added with some Towers, enemy Heroes and Troops. Each of four rooms has difficulties on which only Heroes cooperation can beat. At the end of the fight, which lasts up to 3 mins, participants of the event will each receive a different Mesa Chest Reward. Different rewards come on every Mesa Chest received. 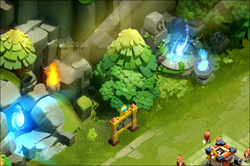 Team dungeons entrance is situated at the right side of the HBM cave and Quest Board. Tap on it for Team Dungeons. Team Dungeons has 8 Chances

of game play where each chance has 6 hours interval of regeneration.

Before picking one of 4 rooms you want to enter (Storm Mesa-1, Storm Mesa-2, Storm Mesa-3 and Storm Mesa-4), you have to create your team first (you need to have a team before you can take part in Team Dungeons).

Edit hero placement for Lost Realm and Team Dungeon battles. Click the icon and place heroes onto tiles. You can choose up to 5 Heroes to participate (there can only be one of each type of Hero). Number in top left corner indicates sum of mights of chosen heroes.

Heroes are placed into a 3x3 grid. This hero configuration determines the way your heroes will be spawn in battle.

You can choose to select “Join Team” to join a room with other random players who has also selected that option. When there are 4 people in the room, the Team Dungeon will begin automatically after 20 seconds. During this countdown players can reposition to different squares and tap on other teams to examine their layouts or tap on the heroes levels list on the left to examine team might levels. Any player can leave at any point before the countdown completes.

Players can create room and invite up to 3 Guild members to take part in it (only members of Guild can be invited). The room creator will begin the battle. Creator can remove invited players who joined the invitation. Invited players can leave the room if the player wishes to disconnect from the room invitation. If a player disconnects after the battle has started, the battle would continue but the disconnected player would not be able to receive the rewards. 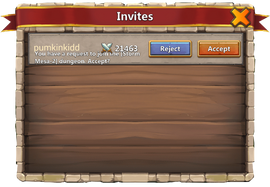 After the room creator has sent out invitations, all Guild members will receive a "Invite" notification at the bottom-left corner of their base. They can then enter Team Dungeons through the notification if accepted the invitation. On the otherhand, if the room invitation is cancelled by the creator, the player who press accept button will then be notified as "room not existing" which mean the invitation was cancelled. If the created room were already completed with 4 players the player who pressed accept button from the invitation will then receive a notification of "room is full" which mean the creator already completed the lists of players needed.

After entering a room, players can choose where Heroes will appear when Team Dungeon begins. Every player can choose its own spot for the team. A good set-up placement can achieve the battle well. 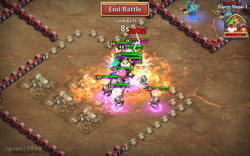 Team Dungeon bosses are immune to Coma and the maximum damage that can be dealt to them is 35,000. The coordination of the Heroes will affect whether you emerge victorious. Several bosses may appear in Team Dungeons.

Team Dungeon bosses are Immune to Coma and the maximum damage that can be dealt to them is 35,000. The coordination of the Heroes will affect whether you emerge victorious. 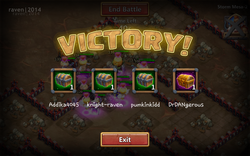 After successfully defeating team dungeon, each member joining the battle will receive a "Mesa Chest". There are 3 types of Mesa Chest - Mesa Chest, Rare Mesa Chest and Mythic Mesa Chest. Participants will obtain a random Chest. The Chest can be seen and opened in warehouse after the battle, and provides some items after opening the box.

Notice: One must have extra space in warehouse to be able to receive Mesa Chest after the battle, so make sure you have enough room before starting team dungeon.

Team Dungeon Event requires knowledge and cooperation and is considered harder compared to Challenge a Boss Fight. Although some detail may vary from Storm Mesa 1 to Storm Mesa 4, there are some common key features you need to know about: