Having grown weary of the same tired opponents who dared to underestimate him, the Lost Realm’s number one enemy has ventured into the world of Castle Clash! With his minions in tow, they've wrecked havoc and hoarded all the treasures in the Wretched Gorge. Round up your Guildmates and rally your allies! It’s time for us to reclaim what is rightfully ours!

The portal to the Wretched Gorge sits adjacent to Storm Mesa’s entrance. Tap the icon with a shield on it for access.

Only Clashers with 20,000+ Might are allowed to create a room in the Wretched Gorge.

Setting Up Your Formation 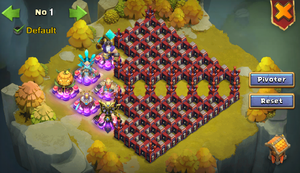 
Up to three base formations can be saved, respectively titled No 1, No 2, and No 3. After placing your defenses on this 10 x 10 base, simply tap the X on the top right to close and save. The base formations are saved locally in the device. If the game is uninstalled or played on a different device, the formations will be lost and the base will have to be set up again.

Buildings in the Wretched Gorge
The buildings that you can use in the Wretched Gorge are Arrow Towers, Magic Towers, Cannon Towers, Hero Bases, and Walls.
You can only use up to 6 Hero Bases, but there are no limits to how many of the other buildings you can use. Your only restriction is the size of the base.
Heroes can be garrisoned in Arrow Towers, Magic Towers, and Cannon Towers to increase the building’s defense. Heroes can also be placed on Hero Bases to join the battle directly.

Interface
1) Default: This represents the default formation you’ll use when entering battle. Only one formation can be selected as default.
2) Rotate: The entire formation can be rotated for easy defensive positioning in battle. Each time you tap ‘Rotate’, your formation will be rotated by 90° counter-clockwise.
3) Reset: Tapping ‘Reset’ will remove all buildings and Heroes from your formation. Because there is no save button, you can’t undo a reset.
4) Up Arrow: Tap the arrow to enter the interface where you can upgrade your buildings.

WG can be soloed with the right base design. In general, ranged and/or healing heroes should be in the front, PD in the middle, AoE heroes flanking and a Cupid or other ranged support hero in the rear. High level Arrow Towers with blue garrisons are recommended for solo players. Many players have also had success with multi-garrisoned Magic Towers.The base suggestion displayed to the right works best in one of the corners.


The defense of your buildings in the Wretched Gorge can be raised by upgrading them. You only have to do this once, and your buildings will be permanently upgraded for all battles in the Wretched Gorge. The maximum level of all buildings here is Lv 30. Gold, Mana, and Honor Badges are needed to upgrade them. Walls can be upgraded instantly but Arrow Towers, Magic Towers, Cannon Towers, and Hero Bases need time for the upgrade to be completed.
Tap the up arrow on the building icons to enter the Upgrade Interface. Here, you can see the time required for the upgrade, the bonuses it brings, and the costs of the upgrade.

Battling in the Wretched Gorge

The Wretched Gorge can be taken on with three other comrades.

Preparing for Battle
Join Team: This button will put you on a random team with three other Clashers. You can be matched with anyone on the server who’s also in the same dungeon.
Create: Tap this to create your own team and invite three fellow Guildmates to challenge the Wretched Gorge with you.


Defensive Might:
The value that appears on the left is the Defensive Might of your base formation. It is based on the Heroes in the base, the levels of the buildings, and so on.
Rotate: Each player can rotate their own base formation before the battle begins.
Edit: When in the preparation interface, your default formation will be displayed. Tap this button to switch to other saved formations.

Victory Conditions
As the battle starts, the demon will lead his monsters to attack your base. Eliminate all enemy monsters and the demon to win. If all the buildings are destroyed or the monsters are not defeated within the allocated time, the battle is lost.

You’ll get sweet rewards if you clear the Wretched Gorge successfully!

Clearing the Wretched Gorge will give you a random reward from the following: Blue Crystals, Red Crystals, Wretched Boxes, Elite Hero Cards, and Legendary Hero Cards. (Wretched Boxes will grant any random Crest apart from Psyshield. The Crest will be either Lv 1 or Lv 2.)