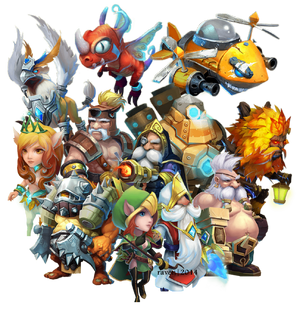 Troops are combat units that can only be used in Raids, Dungeons, Here Be Monsters, Heroes Trial and Quest Board.

There are four different Troop types with three tiers each type that can be hired in Army Camps and upgraded in Heroes are Normal, Ranged, Magic and Destructive.

In battles, if a unit dies in Raids, Here Be Monsters, Heroes Trial or in Dungeons, it will have to be replaced. This doesn't apply if your own base is attacked by another player while you're offline. Troops that dies in Raids on your own base will be regenerated immediately afterwards. You can keep using Troops in battles again if they are not killed.

Normal troops attack Ground units only. They move and attack faster than other types of troops.

Ranged troops attack Ground and Air units. They are stong against flying units and weak against melee.

Magic troops attack Ground and Air units. They are more fragile than other troops, but do a lot of damage.

Destructive troops target towers first. They have higher hitpoints, but only the Ornithopter attacks flyers.

Each type of troops has its own type of Attack and Armor. Different Attack and Armor types give different advantages for battles. Some Attack types are effective against some armor types, but some aren't.

All troops will deal only 65% damage to Heroic Armor no matter what Attack type they are.

Here's the information about the damage dealt of Attack type to Armor type.

This is a full camp of maximum level troop type A vs  a full camp of maximum level troop type B, or an Arrow Tower or low level non-flying hero without skills or talents. Each troop type is of course even 1.0 odds against itself. So for example 5 Ogres are favored 5.4 to one, against the 3 Shotgun Dwarves that also take 15 spaces in a troop camp, if they can close the range to the dwarves without being stopped by walls or killed first. The full table showing all units is at [[1]]